You are here: Home / The Expat Files / (Video) Five Easy Tips For Learning Norwegian and Other Languages Without Moving Abroad PT. 2 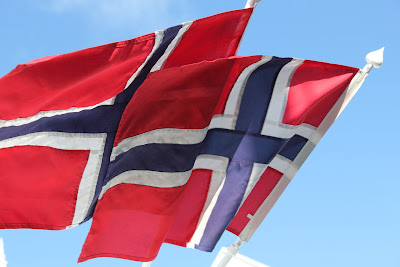 In case you missed it, here is part 1 to this blog post.

I received a tweet last weekend from Lauren Karlisle (@laurenkarlisle) and decided to answer her questions in a two-part blog post.

@thanksforthemat BTW, I wanted to ask you. Do you speak or write Norsk? I am trying to find an online program to (cont) tl.gd/kmb3ac

First off, thanks for the tweet Lauren! I LOVE hearing from blog readers!

As I mentioned on Twitter, yes I do speak, read and write Norwegian. My road to learning Norwegian actually started in Austria in 2005, when I started learning German (the vocabulary in both languages is very close), furthered when I started teaching English as a foreign language (TEFL) in Hannover and was vamped into overdrive when I moved to Norway in 2007. I’m not perfect by any
means and still have a ways to go before I reach what I would consider a “comfortable” level of Norwegian in all situations, but I am fully
conversational and get around pretty well. My strongest skills are in reading and writing. One of my goals in 2013 is to get over my “fears” concerning my heavy accent and improve my speaking skills. I do have to say that my speaking
skills are the weakest of the three, more due to my “perfectionist” mentality towards speaking, than anything else. But, for me, this has been true for the other languages I’ve learned over the years too (Spanish and German).

Norwegian is actually broken into two separate languages – Bokmål (literally book tongue) and Nynorsk (literally New Norwegian). Bokmål is the official language in many parts of the country, while nynorsk is the official language in other parts. Most
pupils learn bokmål in school, and most state publications are in bokmål too (although most are actually available in both languages). In Oslo, many speak bokmål only, while in my area (Stavanger – Rogaland) many speak nynorsk or both. In Norway, most if not all newcomers learn to speak bokmål in language school. So if I had to choose one of the two languages from your perspective, I’d
choose bokmål.
Below are my top five tips for learning Norwegian and other languages without moving abroad. YES – 100% immersion in another culture is a surefire, quick way to learn another language but if you can’t move abroad (just yet or at all), you can still make good headway in learning to snakker norsk or another language!
Remember, these are just some of my tips and suggestions. Be sure to leave yours down in the comments below.
Five Easy Tips For Learning Norwegian and Other Languages Without Moving Abroad PT. 2 (Video)
Tip Five
Watch videos on YouTube for Norwegian language tips. Be sure to watch the videos all the way through once, and then watch twice more, each time repeating everything the speaker says in Norwegian OUT LOUD. I know, you’ll feel silly the first few times, but this really helps get your mouth used to making new sounds and your tongue working in a new way.
Here are a few YouTube videos I have found useful:
Tip Four
The language books which have been most helpful to me in learning Norwegian are the “Teach Yourself” Series, which come along with CDs. I’ve also used the book Practical Norwegian Grammar by Ase-Berit Strandskogen to great success. This book explains Norwegian grammar in detail, in English.
Tip Three
Seek out Norwegian communities online or in person and participate på norsk. When I first started learning Norwegian (and this is HILARIOUS – so get ready to laugh), I took classes for native German speakers who wanted to learn Norwegian. At the time, Hannover only the Scandinavian language classes “for native speakers” only, and I had to “sing my way into” the classes by speaking to the Norwegian teacher (who was German and did not speak word of English), in Norwegian. You remember I said I didn’t speak Norwegian, right? So yeah, I had to “sing my song” and didn’t know the words AT ALL. It’s super funny now, how silly the school’s little rules were, but then – not at all.
In order to prepare for this “test”, I found a few Norwegian language groups on Yahoo (remember Yahoo Groups? Oh yeah these were the good ole pre-Facebook days), and found some people to chat with via Yahoo messenger in Norwegian. I spent several nights after work, online chatting with people from the group in Norwegian trying to use what I was learning through the “Teach Yourself” Series (mind you, YouTube wasn’t big at this time so it was all book +CD based self-study for me in those days!).
Find groups online like I did, or ones in your area, so you can practice with people. I know, everyone wants to practice with native speakers so that they don’t pick up bad habits BUT practicing a little and being a little wrong is A LOT better than practicing nothing at all! And it’s a lot easier to change the bad habits that you learn, then to wait and not learn at all.
Tip Two
Find online support and resources from Universities and academics. Many of the
Norwegian Universities have invested several thousand kroners in developing resources to help their international
students improve their Norwegian skills. Here are a few online resources I have
used:
Tip One

Listen to Norwegian radio via online radio tuners such as TuneIn.
In the early days, I listened to the radio every day just to get a feel for the intonation pattern in Norwegian and to begin to learn the dialects (there are SEVERAL dialects in Norway). This really helped me understand natural speech in Norwegian (Norwegian spoken at a normal pace, not the slower more understandable pace in which most Norwegian instructors speak at during classroom time). I recommend TuneIn for this.
Simply conduct a search for stations in Norway, then look city by city for a station you like. Norwegians love both music and talk radio, so you’ll have the option to choose either format on TuneIn.
So that’s it! There are 5 more of my top tips for learning Norwegian without moving to Norway. In my opinion, learning a new language is fun but also really hard work. Save your sanity and try to make it as fun and easy as possible. In my experience, the most important thing to learning a new language is to build up your confidence and add to your skills as time goes on.
Good luck Lauren!
Did you like my 5 easy tips for learning Norwegian and other languages without moving abroad? Do you have any special tips or tricks for learning Norwegian or another language quickly? Be sure to leave us your tips in the comments down below.
P.S. – I’ve recently been trying to brush up on my Norwegian skills and sought out some additional resources online for myself as someone who has acquired the basics in a language, but needs a new strategy to increase learning speed and capacity. Enter Tim Ferris of the Four Hour Work Week fame. Tim has some interesting blog posts on learning languages which you might want to check out (immediately – cuz’ they are…insightful to say the least).
Why Language Classes Don’t Work: How to Cut Classes and Double Your Learning RateHow To Learn Any Language in 3 Months
How To Master Any Language in An Hour