You are here: Home / Norwegian Recipes / 10 Norwegians You Should Be Following on Twitter 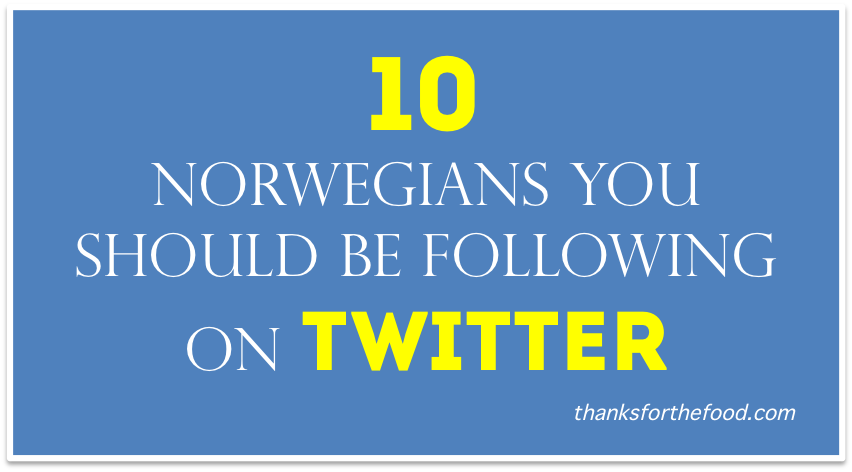 David Nikel runs Life in Norway (you can catch me writing there too from time to time) and tweets about, what else, Norway. Very good starting place for anyone trying to stay, keep or get in touch with all things Norwegian on Twitter.

I keep talking about my trip last month to Røros and Trondheim because it was incredible. These guys get to live there. Follow them and live the dream.

Curator of all things Norwegian in the twitterverse.

Megan is an American living in Oslo who travels all over the world and writes about it on her blog meganstarr.com. She’s also works for Stay.com.

6 Things You Didn’t Know Were Norwegian http://t.co/wKOJV4Lpm4 via @PineTribe #norway

A kin to American Ball brand jars, theses canning jars are sought out for more than just storing one’s favorite jam. Norgesglasset are iconic and beloved for being the awesome icing on your shabby chic decorating cake. Follow them on Twitter for inspiring and fun ideas on how to use their jars.


Former NRK journalist and forever food enthusiast , Ingveig has more energy than most people I know. You’ll catch her tweeting about politics, Norway, communication subjects such as public relations and of course food.

Norway’s premiere coffee aficionado, and has the accolades to prove it. More than just an award winning coffee guru, Wendelboe connects to the soul of the coffee business by traveling to coffee producers all over the world and soliciting good will.

today it is 16 years since I started working in coffee. Feels more like yesterday.

Gard is a travel extraordinaire along with his wife Nikki. They travel the world doing cool stuff like surfing sand dunes, exploring parmesan factories and eating food while it is still moving. Active on Twitter, even more so on Instagram.

Hovden Formal Farm Wear creates clothing for today’s lifestyle inspired by traditional work clothes. Handmade by craftsmen in Europe and the U.S., our high-quality garments use 100% natural fabrics and sustainable production methods, just like our ancestors did 150 years ago.

WDAY TV news made a nice feature on our busserull shirts! http://t.co/FOHzEDT8qi

Lervig has a cult following in Stavanger, which is growing throughout Norway and the world. These guys along with Andreas Melvær from Melvær & Lien are bringing Stavanger its first craft beer festival, What’s Brewing, the weekend of October 31. Lervig’s Brewmaster, Mike Murphy, is soon opening his own bar in Stavanger.