You are here: Home / American / Chicken and Sausage Gumbo 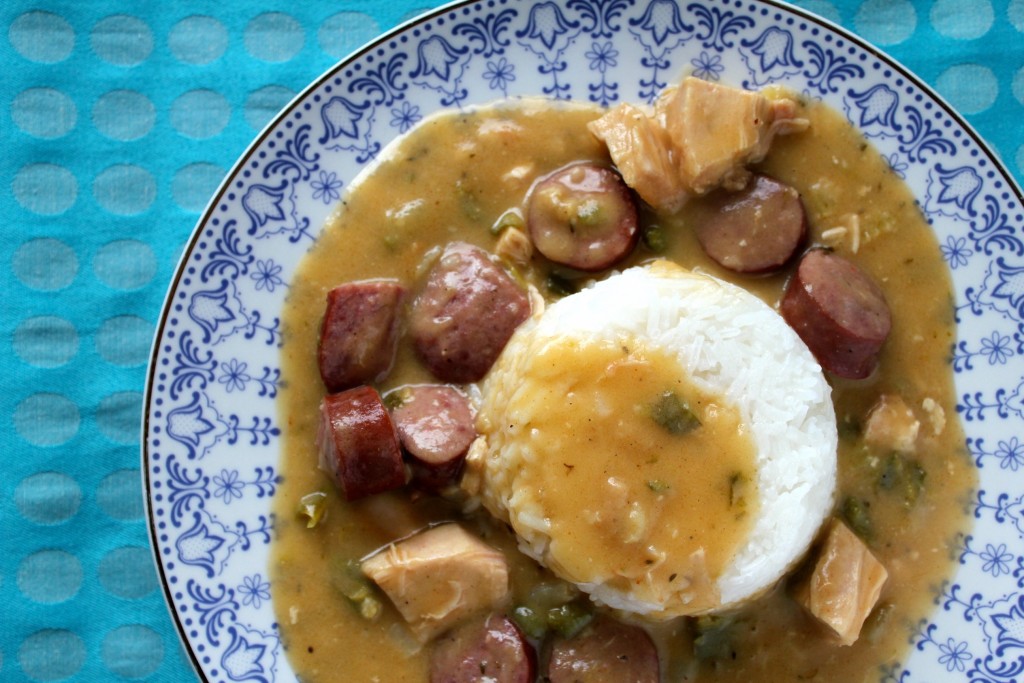 If you have never tasted gumbo before, this is a great combination to try since chicken and sausage are pretty forgiving ingredients, therefore leaving you to focus on the trickier part of the recipe, getting the roux, or thickening base, right. Or more accurately put, keeping the roux from burning normally signaled by the presence of black flecks. To keep the roux from burning, do not let the oil get too hot before you add the flour in, stir the pot steadily so the flour doesn’t have the chance to stick to the bottom of the pot and use a whisk, not a spoon, to stir the flour into the oil. This will also help the roux from getting lumpy, and we all know how uninviting lumps in sauce can be.

What is gumbo and what significance does it play in the American culinary tradition?

Gumbo, is a dish which originated in the Creole communities in the southern regions of Louisiana during the 18th century. Gumbo combines culinary inputs from West Africa, the Native peoples of Louisiana, the French settlers and the Spanish settlers which were common in this area during the time. If there is one American dish which symbolizes the “melting pot” idealism of the U.S., gumbo is definitely a contender, although this recipes goes back over 200 years. To read more on the history of gumbo, check out more from Southern Food Alliance, What’s Cooking America, or  The Atlantic.

While gumbo can be made with any combination of seafoods like shrimp, fish or crayfish or even chicken and sausage, it is normally thickened with one of three ingredients; okra (also known as lady fingers), file powder (ground sassafras leaves) or roux (a French base of flour and fat traditionally used to thicken soups and sauces). Although, I grew up eating gumbo thickened with file powder, in Norway, file powder is no where to be found. Here, I always use a French style roux as the thickening agent in my gumbo, and you should too. Using a roux as a base for gumbo means it will thicken without becoming slimy, and since you can control the depth of flavor by how dark you allow the roux to become, you have more control over the end result.

Stavanger is special in that we have one of the oldest butchers in the entire country located in the city center. And guess what? They sell andouille, the smoked French style sausage used in chicken and sausage gumbo! If you can’t find andouille sausage in your area, you can substitute it with any smoked sausage which you prefer.