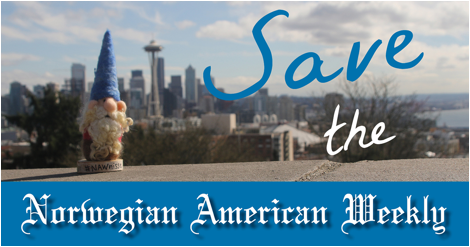 Once upon a time, there were hundreds of Norwegian newspapers in America.

These newspapers played a crucial role in the lives of early immigrants. They both connected immigrants to their home country and bonded them together into an American community. According to Odd Lovoll, author of Norwegian Newspapers in America, “There was an intimate relationship between the publishers and subscribers.”

Today only one of these newspapers remains, the Norwegian American Weekly. It was the result of a merger between the Western Viking and Norway Times, both of which have been publishing for over 125 years.

Tough times for newspapers has led to a decline in subscriptions and advertising that recently prompted NAW to announce its immediate closure. Though continuing to publish, NAW needs help and is reaching out through an Indiegogo campaign. You can contribute to the newspaper through the campaign, which will run through the month of April, at www.indiegogo.com/campaigns/save-the-norwegian-american-weekly or igg.me/at/naw.

Many exciting rewards are on offer there, including copies of the “final” issue of the newspaper, which was printed but never distributed during NAW’s brush with death. Also available are several packages featuring NAW’s newest friend, a nisse named Nils Anders Wik. Subscriptions to both the digital and print version of the paper are also on offer there, as well as discounted advertising packages.

About the Norwegian American Weekly

The Norwegian American Weekly is the voice of Norway in America since 1889. Publishing weekly, 47 weeks out of the year, NAW brings news from Norway and the Norwegian-American community, business, sports, opinions, recipes, comics, crossword puzzles, and features to an estimated 10,000 readers in the United States and worldwide.