You are here: Home / May 17 / Syttende Mai, Norway’s Constitution Day 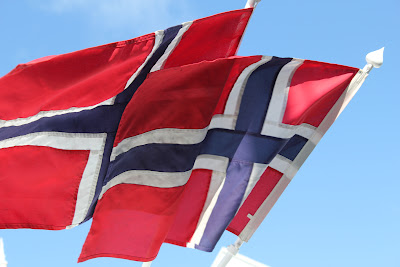 This year marks the 200-year anniversary of Syttende Mai, or the 17th of May as it colloquially referred to. This year Syttende Mai celebrations all over the world will be extra special in marking of the day the Norwegian constitution was signed in Eidsvoll, Norway in 1814.

Although condemned in its early years by the Swedish and then Norwegian king, this celebration of Norwegian statehood marks one of the occasions every year Norwegians wear their traditional outfits called bunads, take to the streets in parades, celebrate with family (plus eat lots of cakes and drink strong, dark coffee). Syttende Mai occurs during the end of the school year and gives high school students in Norway a chance to put an end to all of their russing!

Syttende Mai, or 17th of May as it colloquially called or Constitution Day (Grunnlovsdagen in Norwegian) as it is more formally called, celebrates the day the Norwegian constitution was signed in Eidsvoll, Norway on May 17, 1814. Syttende Mai is an annual celebration of all things Norwegian. It celebrates Norway’s declaration as an independent nation from Sweden although full independence would come in 1905.

Every city and town in Norway has at least a children’s parade to celebrate Syttende Mai. Children and their adult counterparts march down the streets of their neighborhood in bunads or their best formal clothing, waving flags or playing their instruments if they are apart of their school’s marching band. In larger cities, such as Stavanger, there is also commonly a parade for the adults in town to march in celebration of Syttende Mai. The largest parade on Syttende Mai is in Oslo, the Norwegian capital, and includes more than 75 schools and marching bands. The Oslo parade route includes a trip past the Royal Palace, where the Norwegian Royal Family greets parade participants and passer byers from the main balcony.

Outside of Norway, Norwegians and Norwegian descendants all over the world celebrate Syttende Mai. The largest population of Norwegian emigrants travelled to the U.S., which means the U.S. also has the largest Syttende Mai parades outside of Norway. In the U.S., parades, speeches and fun runs are held in towns and cities with sizable Norwegian emigrant populations such as Seattle, Washington, Brooklyn, New York, Stoughton, Wisconsin, Minneapolis, Minnesota and Billings, Montana. The Syttende Mai parade in Seattle lays claim to being the third largest in the world behind Bergen and Oslo.

Norwegians celebrate Syttende Mai by eating of ice cream (is in Norwegian) and hot dogs (pølse in Norwegian) during the parades or shortly after. Later in the day, after the parades have finished, Norwegians tend to gather with other family members for smørbrød (open-faced sandwiches) served with milk, juice and carbonated water as well as coffee and tea. Several varieties of cakes are also served on Syttende Mai, including the classic bløtkake (a cousin to the very British Victoria sponge), Suksesskake (“success cake”) or Verdensbeste (“The Best Cake in the World”). More coffee is of course served to help wash it all down.

In January 2014, in celebration of the bicentenary of the signing of the Norwegian constitution, Food and agriculture minister Sylvi Listhaug launched a competition to find a new Norwegian national dish. Listhaug called for this competition in order to get Norwegians to think seriously about their national dish, fårikål, as well as their regional specialties. Entrants to the contest must be sourced from ingredients produced in Norway. Norwegians have been celebrating fårikål, a dish comprised of boiled cabbage and lamb meat, as the Norwegian national dish since 1972.

The contest, which has its own Norges nasjonalrett 2014 Facebook page, started no less than a fire storm, with some asking for Listhaug’s resignation instead of updating their beloved national dish. While the controversy has died down since the contest was first announced, some have started to wonder if the new national dish will also reflect the more recent immigrant groups to Norway. So far, dishes like Norwegian meatballs in brown sauce, lapskaus, fiskeboller in white sauce and poached salmon among others have been gaining ground as the new national dish in Norway.

Russ is a special Norwegian phenomenon, which can only be described as tolerated social mischief. “Russ” are high school students in their last year of school who wear self-decorated red or blue overalls and spend about a month acting mischievous all over town. Many russ spend their month of debauchery drinking heavily and causing trouble. The phenomenon started as way for students to blow off steam after years of studying, but has evolved into the Norwegian version of April’s Fools Day meets Spring Break. Russ are tolerated for the most part by the police and local community until May 17, when all russ activities are supposed to end and students return to their normal calm selves.

During the month of “russ”, usually beginning about 6 weeks before Syttende Mai, russ students play tricks on their classmates and neighbors, drive around in old vans playing very loud music, steal street signs and commit other acts of social defiance. They also pass out cards with their photo and information on them, to trade like baseball cards.

For More on Syttende Mai, Norway’s Constitution Day, check out:

17th of May Parade – Seattle